MUNICH – (MunichNOW Culture) With big cats and an even bigger claim to fame as being the largest circus in Europe, Munich’s Circus Krone doesn’t fail to deliver on hype-building. This year marks the 110th year of strained eyes and necks from circus-goers trying to spot soaring acrobats in the peaks of the circus tent. 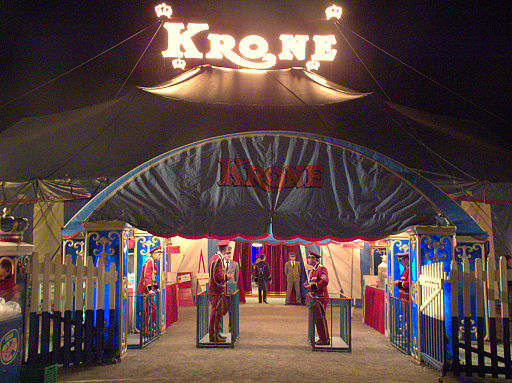 The circus began in 1905 under the leadership of director Carl Krone and was later passed down to his daughter Frieda and his son-in-law Carl. The family-run organisation was then handed down to the next generation, the couple’s daughter Christel Sembach-Krone, who is the current director of the circus.

It was decided the show must go on during World War II, where performances at Circus Krone continued despite many of the shows being interrupted by air raid alarms. On 21 December 1944, the building had to be evacuated and the stars of the show were relocated to the Krone Stud Farm in Wessling. The structure was destroyed by aerial bombing and the construction of a replacement soon began.

One year after the fall of the iconic Krone building, a temporary wooden structure was built in the place of its destroyed predecessor. The year 1962 saw the completion of the permanent building that today lies on Zirkus-Krone-Straße 1-6. The setup consists of a tent that can comfortably provide 3000 spectators with majestic displays of flexibility and the skipping of a heartbeat when a fall to the tent floor seems imminent.

Circus Krone has always been a popular place where audiences could gather to observe the unique behaviour of some of the world’s most wild and seemingly untamable animals. Perhaps none more wild than rock bands KISS and AC/DC, who entertained the crowds from the Circus Krone ring in 1976 and 2003 respectively.

The Rolling Stones first took to the Krone stage in 1965 and returned for a second performance in 2003. Led Zeppelin starred there in 1970. The Beatles came to Munich as part of their Bravo Blitz Tour where they stayed at the Bayerischer Hof Hotel. They performed two sold-out shows at the Circus Krone Building on 24 June 1966.

The second concert of the night was filmed by TV network ZDF; however, the skies weren’t looking so marmalade for the group and the show wasn’t without its hiccups. The Beatles performed 11 songs, struggling more than once with lyrics and mixing up the album title for one of their songs.

Europe’s biggest circus promises more tension-building music than a James Bond film and enough contorting gymnasts to leave you questioning your flexibility (or lack thereof). Ticket prices range between €15-40 and all information regarding ticketing can be found at http://www.circus-krone.com/de/circus-krone-bau/tickets.html.